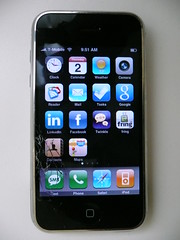 Last week I impulsively tweeted (twittered? I think that’s more clear) about the unfortunate accident my iPhone met with my bathroom floor. I guess it’s lucky that the damage is superficial, but I was floored by the outpouring of support I received from friends and strangers. So here’s the update: Everything still works and a smooth plastic cover is preventing me from cutting my finger when I play FS5 Hockey.

In truth, I don’t play games on my iPhone all that often, unless you consider Facebook and Twitter games. I have a friend who scrolls through the applications I’ve downloaded every time we meet, looking for new tools and tricks to help her make the most of this very expensive little device. I thought I’d post some of my favorites here. These are the applications that I think make my life much more efficient — they’re helpful for me, a Los Angeles-based writer who travels often, particularly in Asia.

Ok, maybe not every Google iPhone application is a gem, but they are useful quick links to things I use all the time. I particularly like having a button for Google Reader and Tasks on my home screen. While their mobile email and calendar designs are really nice, I’ve got it all linked via Exchange to my iPhone itself.

LinkedIn, Facebook and Twinkle are my social media apps of choice. I don’t use LinkedIn all that much, but I like the idea of having all my contacts’ updated job status and email addresses at my fingertips in an iPhone friendly format. Facebook — well, everyone has that one.

I chose Twinkle for updating my Twitter account because I like the “Nearby” option. Because the tweets are geotagged, you can look at what people nearby are talking about — often drivel, but during the Orange County fires, or even the presidential debates, it was really interesting. In Hong Kong, I got a suggestion from a stranger about a great noodle place, just by asking on Twitter. The possibilities are endless — bargain hunting, troubleshooting on your computer — chances are, someone can help you out pretty fast.

I know there’s a Skype app…

…but I still choose Fring. It gives me access to my Skype account and I have been able to use it to make international calls on the cheap from my home in the U.S. or an Internet cafe in Cambodia. I figure, if it ain’t broke, why switch to the official Skype application now? If anyone has good reason, I’d love to hear it.

The one I paid for

I’ve only bought one application: Converter. It was originally a pre-App Store app, but I didn’t regret the $.99 to get the newest version. It’s really useful for people who deal with lots of currencies or want to make sure they are buying things in the right size when they are shopping in Europe or Bangkok. You can really convert anything you can think of with this simple and quick application.

I have been using Speller, but I just converted to Dictionary.com’s new application. Sometimes you need a spelling, definition or synonym on the go.

If you have a car and you don’t know your transmission fluid from your air filter, the best way to avoid getting ripped off by a mechanic is to fake it. And the best way to fake it is to surreptitiously look things up on your phone with a handy application called RepairPal. The site asks for your make and model, and then lists the kinds of repairs and tune-ups you might be offerred. It explains them and gives a price range and also looks up garages nearby for easy comparison shopping.

Last but not least, a surprisingly useful application for me has been Flashlight. It’s so simple — a white screen for your phone — but I’ve used it in a power outage in Fremont and an evening hike to a bat cave in the Philippines.