If you are reading and watching American news in the last few weeks, you are probably simultaneously seeing a lot and very little about Islam in America today. The conversation surrounding Park51, the Islamic community center slated to be built in Lower Manhatten, is often very shallow, with little explication of terms and nuance. Words are being thrown around — Muslims, freedom, the Muslim Brotherhood, jihad  — as though they are self-explanatory and monolithic. Here are a few titles I have reviewed recently that might give a deeper understanding of the issues behind this politicized debate:

A Mosque in Munich by Ian Johnson

I reviewed this book before meeting Johnson in person at a public conversation we had at UC Irvine. His book is a highly readable — suspenseful, even — history of the Islamic Center in Germany and the United States’ role in creating it during the Cold War. Here’s the review, which was originally published by Zócalo Public Square:

Reading nonfiction is not usually an adventure the way reading fiction can be. It is more often an intellectual exercise that rarely enters the realm of imagination. A Mosque in Munich does both. It starts with a cast of characters, is scaffolded by a translation of Goethe’s “Ginko Biloba”, and takes off on a winding narrative stemming from the author’s curiosity in a bookstore of radical Islamic literature.

The Islamic Center of Munich was built 30 years before the U.S. began enlisting Muslims to fight the Soviet Union in Afghanistan. But Ian Johnson’s investigative history of the mosque unveils a surreptitious attempt to use Islam as a weapon in the Cold War long before it was stated policy.

In World War II, an estimated 250,000 Muslim minorities from the Soviet Union surrendered to the Nazis and fought against Stalin’s regime. Many of them ended up in Munich after the war, where Britain, the United States, and West Germany vied to turn them into agents for their own causes by bolstering an Islamic revival. Under Truman and Eisenhower “covert operations weren’t to be limited to the communist world but would include the ‘free world’ as well,” Johnson writes. “Put less euphemistically, the U.S. government would secretly manipulate public opinion at home and in scores of other noncommunist countries.”

In the 1950s, the CIA spent half a billion dollars per year in covert propaganda efforts to subvert the Soviet Union from the inside. Muslim exiles were key to the plan; they were given jobs with the front operation Radio Liberty, traveled under cover on pilgrimage to Mecca to influence Soviets visiting the holy site, and were sent with press credentials to conferences and meetings to counter communist ideology. CIA support propped up leaders of the Muslim Brotherhood, the globalized political Islamic movement which has been accused of having terrorist ties. By the time the mosque in Munich was built, it was a stronghold for the Brotherhood’s network in the West.

A Mosque in Munich is an eye-opener about the depth of U.S. policies on using religion. But it is also a packed narrative with complicated characters whose motives are never clear-cut. It is a fast-paced read with action in every sentence. The story is told in vivid detail, and attributions and sources — which are impressively robust — are saved for a 50-plus page section at the end of the book. Johnson approaches history as a journalist, seeking not only to uncover facts but to get to know characters, who show us how much the world can change because of the idealism, greed, fear or egos of a handful of people.

In his prologue, Johnson writes, “I wondered what remains of a life when it is stripped of a public identity.” The intrigue and tenacity of A Mosque in Munich gives those lives, the intelligence agents and the Muslims in Munich after World War II, a captivating retelling in a book worthwhile for politically-inclined and plot-driven readers alike.

This is a collection of essays about a transnational movement. It’s uneven in quality and, particularly in the essay about North America, at times needlessly alarmist and not well-sourced. In light of allegations surrounding Park51, though, this text shows that The Muslim Brotherhood is not a monolith of evil. In fact, it’s not a monolith of anything. Its incarnations all over the world are highly independent and have very different goals, which makes any “guilty by association” claim difficult to sustain. Here’s an excerpt from the review:

The movement began in the 1920s in Egypt, with the original purpose of elevating the role of Islam. Today, thanks in part to its members migrating around the world, it’s a loose global network of political opposition parties, social groups and scholarly institutes. The essayists, mostly scholars, vacillate between taking an even, careful tone and proscribing the decades-old group’s existence outside Egypt.

But they also take the more crucial step of explaining what this movement is not. The Brotherhood is not a top-down, tight network — a very important difference from the jihadist groups that dominate American news. While Muslim Brotherhood-affiliates are all influenced by major ideologues, they “operate in silos,” independently responding to local conditions and often engaging in existing institutions with the hope of influencing them from the inside. They focus on local issues — participating in elections and slating candidates in Jordan and Egypt — while jihadists such as al-Qa’ida focus on their obsessions with the West. While not opposed to violence, they do not see the use of force as a particularly effective way to reach their goals, with a few exceptions. One Brotherhood member who serves as an Egyptian parliamentarian said that he supports the activities of jihadist groups, but calls those who kill other Muslims murderers.

If you’re looking for a light read to help you understand that Islam is not a monolith — and one that comes with great beats — this is your book. It’s no literary masterpiece, but the in-text soundtrack is wonderful and this is a great companion to Ahmad’s own music with his band Junoon, Nusrat Fateh Ali Khan, the Beatles and Led Zeppelin. Which is certainly refreshing in a book about Pakistan, immigration and Islam. Here’s an excerpt from my review:

Ahmad’s writing is much like his music — it carries a simple, consistent rhythm and alternates between pop sensibility and diary-like expositions. His childhood memories and quick takes on politics and history mingle with surreal celebrity stories — playing cricket with Imran Khan, taking Mick Jagger to a red light district, meeting Princess Diana at a dinner party.

A son of Lahore, Ahmad spent six formative years in America, where he bought his first guitar and joined a high school band in a small town on the fringes of New York City. His family returned to Pakistan in 1981, to an urbane and elite life. Ahmad trained as a doctor but never pursued a career in medicine. The first time he performed in Lahore, when he was in college, his guitar was smashed by a member of a student wing of a Pakistani religious party. From then on, Ahmad’s musical career survived the dictatorship of General Muhammad Zia-ul-Haq, who implemented conservative Islamic laws and restricted music and culture, and the corrupt back-and-forth leadership of Benazir Bhutto and Nawaz Sharif. Changing political whims presented challenges — from death threats to distribution blocks — to a rocker trying to introduce something new in Pakistan.

At its best, however, this is not a political history. Ahmad is often forthright with his opinions, but Rock & Roll Jihad is most interesting when its politics are more subtle. Ahmad’s boyhood stories, for example, are more powerful than his direct commentaries. He recalls holidays in Swat Valley, before the Taliban takeover, and a college brawl he witnessed between Sunnis and Shias, whose distinctions meant very little to his Sufi grandmother. These parts of Ahmad’s story beg a reconsideration of now-loaded words like jihad and taliban, and inspire an urge to get lost in the haunting music of Sufism. 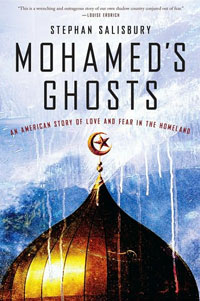 Mohamed’s Ghosts: An American Story of Love and Fear in the Homeland by Stephan Salisbury

Last but not least, I just finished a review of Mohamed’s Ghost. The review has not yet been published, but in short, this is a book that offers a timely reminder of how our country treated Muslims, Middle Easterners, South Asians, Africans, and war on terror critics after 9/11.  It reminds us what fear makes us forget about the diversity of America, what fear makes us forget about individual rights. I can’t share the review, but here is one line that might make you interested in the book: Salisbury writes, “Freedom threatened leads defenders to threaten freedom.” And I write, “In truth, Salisbury is haunted by the stories of the Muslims he reported on in Philadelphia. The import of this book is clear: before we rush to judge, we should allow ourselves to be haunted as well.”