The collection of essays about everyday lives in China that I have been working on for about two years made its pre-publication debut in China at the M Literary Festival. Chinese Characters contributors Evan Osnos, Ian Johnson, Michelle Loyalka, Christina Larson and my co-editor Jeffrey Wasserstrom spoke on the “Art of the Profile” at a Beijing panel discussion earlier this month. 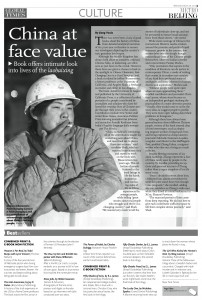 Our first mass media press, therefore, also happened in China. The English-language Beijing newspaper Global Times sent a reporter to the panel, who in turn wrote a preview article of our book. The story, “China at face value,” begins this way:

“There has never been a lack of good books about the history of China, from detailed analytical narration of its 5,000-year civilization to numerous travelogues depicting the country’s vast, grandeur landscapes.

“Although the Middle Kingdom has always held allure to outsiders, ordinary Chinese folks, or laobaixing, are often seen as just faces in the crowd. However, those faces are given a chance to bask in the spotlight in Chinese Characters: Fast-Changing Lives in a Fast-Changing Land, a book co-edited by Jeffrey Wasserstrom, a history professor at the University of California, and Angilee Shah, a freelance journalist and editor in Los Angeles.”

The reporter, Jiang Yuxia, interviewed me via email. She had some interesting and fair questions about how and why Westerners read and write about China. Here’s how that thread went:

Jiang: Why are you interested in working on a book about the Chinese masses and how long did it take you to finish it?

Shah: Jeffrey Wasserstrom and I began discussing a book of essays about everyday life in China about two years ago. We were really interested in doing two things: One was to tell great stories about real people who struggle and thrive in a changing country. We wanted to create a collection that readers around the world could relate to, that would show humanity and diversity. English-language readers, we thought, might have a richer view of China if they had more access to everyday lives.

We also wanted to draw on the deep knowledge of scholars and journalists who have ground-level views of life in China and highlight their excellent work. There are some familiar faces in this book, but also some very talented writers with whom readers might not yet be familiar.

There are 15 characters (as I’m aware of) in the book with diverse backgrounds. Did you have a clear idea what characters you would like to have in the book when you started working on it, or did you just take in all the contributions you could have?

Chinese Characters has 15 chapters and each revolves around one or more characters, so strictly speaking there are more than 15 characters in the book. We started by talking to writers whose work we really respected and enjoyed reading. We looked for people who had deep connections and unique perspectives on China and approached them about contributing. From there, we worked through different narratives to get a diverse selection of stories, all with very interesting plot lines but from different parts of China. So we ended with both geographic and socioeconomic diversity. For example, we wanted to have a chapter about someone elderly so that we could be sure to have a longer view; Harriet Evans’ chapter is about a 90-year-old woman in Beijing. We also wanted the perspective of someone younger; Leslie T. Chang’s contribution is about a teenager.

The book portrays a wide range of characters, from migrant workers to young students. Do you think they are representative of the Chinese masses or they are more like individual characters?

We would never claim that any one person or story — or even 15 stories — could represent China. One thing we hope this collection does is show that China is endlessly diverse, that it is a country where broad generalizations about Chinese people are usually wrong. We wanted very much to tell the stories of individuals close-up, and not be pressured to extract broad assumptions from those stories.

How do you avoid streretpyping the characters? For instance, migrant workers are often portrayed with a harsh life elsewhere.

The contributors to Chinese Characters spent a lot of time with the people they wrote about. It’s hard to make generalizations when you get to know someone very well. We hope that readers have this experience with the book as well. Michelle Dammon Loyalka’s chapter about a migrant worker who sorts recyclable goods, for example, is a nuanced portrait derived from deep reporting. Like anyone, his life has some harsh realities and some moments of joy. He is complicated, and certainly not a generic version of migrant life. We did our best to give each contributor the space to tell those complex stories precisely because we did not want to make stereotypes of real people.

When you are editing the book, are you more concerned with a unified writing style, or do you want chapters that are completely different each other?

The chapters are unified in the sense that they are all devoted to telling stories. But we were very careful to keep authors’ voices in tact. If we wanted to portray unique perspectives, we couldn’t very well expect them to all have the same tone and writing style. And we chose writers in part because we really enjoyed their prose. While the chapters have similar structures — they all have beginnings, middles and endings — they each have their own styles.

You have written a lot on China and know Chinese [people] well. Is there any character in the book whose story is shocking to you?

Shocking is not the right word. Perhaps surprising is closer. I think China is endlessly interesting. As a journalist and editor, I think I will always be, essentially, a student. All of the contributors taught me something new about China, and most took me to places I have not yet seen. James Millward’s chapter, for example, presents China from the point of view of guitar players. I don’t think I had ever read a piece like that before, or even imagined China from the point of view of a rocker.

What kind of characters do you think would be of great interest to the Westerner readers?

I hope that Western readers will gravitate to all of the characters, to be honest. The people in Chinese Characters are real, with talents and flaws and interesting lives. I can’t really make predictions about how each chapter will be received, but we hope that the stories are engaging and diverse enough that there is something there for everyone, from scholars and China-watchers to those who are just beginning to read about China. I also hope that readers will enjoy the experience and appreciate the literary qualities that these talented writers have developed so carefully.

Chinese Characters will be published this summer from UC Press. Learn more and sign up for newsletter updates at the book website.