I took a trip to Kuala Lumpur this weekend. It was a long, eventful two-day sojourn.

I left with some friends on Friday night on an overnight train — that’s my storybook beginning. It’s almost Harry Potter-esque, isn’t it? Sleeper trains are a great way to travel.

When we got to the city, we went to a hostel in Chinatown, which I found to be a pretty convenient location for seeing the sights. The Backpacker Travelers’ Inn was also like a storybook. It’s one of those place you can tell has been around for a long time. There were posters from the 80s on the walls, and a shelf where backpackers can buy and sell used guidebooks. The receptionist seemed to have too many people — too many storybook characters, maybe — floating around in his head. He had a lot of stories to tell — not that his guests should necessarily believe them all. 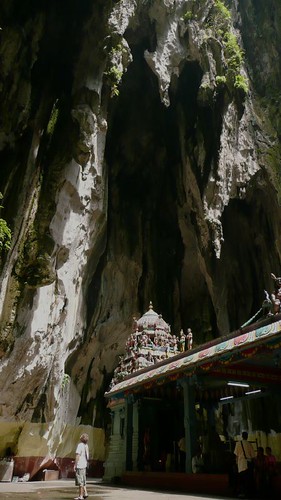 That day we took a trip to the Batu Caves, about 20 or 30 minutes north of the city. Inside the caves are simple South Indian-style temples. The main temple is devoted to Murugan, a god of war who comes to the aid of those in need. It’s hard to imagine a place that is better for prayer. The caves look up to the sky — and forgive me for being a bit cheesy here — and you almost feel like you’re getting a glimpse of heaven.

Then there was shopping — I discovered, as my backpack got heavier, that it is not a good idea for me to be around so many reasonably-priced textiles and shawls.

The next day, Kuala Lumpur and the area around the Batu Caves were consumed by protest. I wrote a quick post for Global Voices, but I’ll just add here that I was on the fringes of the protest. There was some really courageous journalism and blogging happening around this story — some reporters got right into the tear gas. Some got close enough and were patient enough to get amazing shots.

I woke up in the morning planning to go to a large shopping mall near the Petronas Towers. I went to the train station — the two stations near the centre were closed and there were police officers observing travelers at both entrances to the station. I tried to hail a taxi — it took me four tries to find someone to take me near the shopping centre. They all explained that the traffic was too bad and roads were closed.

I could see groups of bewildered South Asians walking around Chinatown trying to find a way to get to the protest. Many of them, I found out later, went on foot, walking as much as 5 or 6 km in pretty serious humidity. I discovered that I can pass in many situations — I can be Indian, some thought I was Malay, some just saw me as an American. I think this helped me get a taxi to drop me about half a mile from the protest.

I got to the protests and watched for about an hour and a half. There was a lot of tear gas — I could smell it even though I was about half a city block from where it was being used. The protesters had come from all around Kuala Lumpur and were very persistent to get there. They clearly felt strongly for their cause. When it was time to leave, I walked for about 45 minutes before I could get far enough away from the protest to be able to get a taxi. I was lucky to get one — I didn’t see any other taxi stop to pick up anyone up who looked like they were coming from the protests.

I got back to Chinatown, had a good lunch and a good look at some more textiles (luckily I was too exhausted by that time to indulge any more). We waited for the charter bus back to Singapore for about an hour and I was asleep as soon as I found a comfortable spot in my recliner.

ICYMI a lot of good titles here, including both predictable ones & some insightful ones that haven’t gotten as much attention as they deserve; glad to ones by @ananthkrishnan @JimMillward & Harriet Evans (all contributors to @angshah & my old Chinese Characters book) made the cut twitter.com/WhatsOnWeibo/s…